“By god’s grace I got the opportunity to be a model”, Amardeep Kaur Syan

Born in Vadodara and brought up in the city of dreams, Mumbai Amardeep was crowned as Manasvini Miss Thane in 2016. Moving on, she also won Femina Miss India Gujarat 2017 title. Struggles are an integral part of growth. Similarly, Amardeep’s struggles have made her stronger. She is an immensely talented model and actress. Amardeep’s journey is full of ups and downs but what makes her different is her dedication to her career.

Amardeep started her career as an actress at an age of 18. She also did an acting course and gave a lot of auditions. But due to some personal reasons, she had to take a break. Elaborating, she says,

“I lost my father 15 years back and my mom and brother were not keeping well. I had my grandparents to look after. Also, at that time I had my college. So a lot of this clubbed together, unfortunately, I did not pursue acting at that time due to family responsibilities”

About her Pageant Journey

At the age of 24, Amardeep took part in Manansvini Miss Thane in 2016. Though she participated in the pageant with no expectations of winning. Alesia Raut, the co-founder of Cocoberry trained Amardeep. While discussing more, She said,

“Fortunately I won the pageant. I wanted to resume my acting career. After winning it, I thought why not give a shot at modeling. Since childhood, a lot of people around me have told me that I have a good height and I should try modeling. So, then at that time, I was ready for taking my steps forward.

After winning the pageant, Amardeep acquired training from Anjali Raut and Alesia Raut, founder of the Cocoaberry agency. Also, took ramp walk training from them. Further, she tells,

“I still remember it was 31 t July and it was my first show at Surat for TBZ jewelers. That was my first show as a model walking the ramp. The journey just began for me. Then I was walking for Lakme and Elles Designers. Since then there has been no stopping for my jouney as a model. It just started and is continuing till today.

Then in 2017, Miss India happened for me. I tried and gave an audition. Because I was born in Gujrat, Vadodra, I could audition for Miss India Gujrat.

Sharing her experience of getting trained from Cocoaberry which is one of India’s biggest modeling agencies, Amardeep expressed how grateful she is to them.

“I was in the third batch of Cocoaberry when they just started and did not even think of a name. It was their starting phase. The journey was amazing, because they really gave that personal touch to the overall training. Like till today, they are my guiding stars. I was in safe hands in the industry.

Also, I got work via them, I did not have to go out and look for work or anything. I really didn’t have struggle in fetching work. They are still in touch with me and they know what is happening in my life. They are my pillar of support too. So, they are more than mentors, they are like my family.

While having a discussion about her modeling career, Amardeep also shared her experience of the pageant world. She was not that interested in a modeling career. Neither did she know about pageants nor how it works.

“In today’s time when looking at these young aspiring models and these teenagers, they know so much about the pageantry world. Even in my time girls actually knew what pageant is all about and what kind of preparations you have to do for the pageant. But for me, it was very new because I was not very much keen on getting into modeling. It just happened for me. Even when it came to pageant I was actually told by Alesia and Anjali ma’am that I should try my hands for Miss India.

So, I went ahead, because winning a state title was also a very big thing. Because you are known to the people, to the world by that one title. I still remember when I started working I use to work back to back. I use to hardly be at home. At the same time I use to go for workouts, I use to take care of myself. It was full of hard work and when I look back I don’t remember a lot of things, like enjoying any moment.

Everything happened under a lot of stress to me. I wasn’t very informed about the pageant world, unlike other girls. So, it was a first-hand experience I got to learn a lot about so many things. I personally believe that being optimistic and taking things as a learning way, that’s the best thing.”

We all have hobbies and interests outside our professional careers. So does Amardeep. She sings very well and knows how to play the harmonium. Also, she loves to go on solo trips and drives.

Talking about what she planned for herself before modeling, Amardeep told that she did not plan anything. She wanted to take up science and opt for a medical degree. But due to unfortunate circumstances, she could not.

“In class 12th I opted arts and wanted to pursue Psychology further. When I took admission in a psychology Bachelors degree, I realized that no this is not my interest. The college had begun and I was like I was more interested in Mass Media.

Fortunately, I got an opening at Thana College and got a seat. I went ahead and then I did my Bachelors of Mass Media in advertising, which I really enjoy. Because it is related to media, it is fun. You know you like everything. I really enjoyed that process and that is where I realized I am more inclined towards acting. When I was in my second year of BMM that was when I did my acting course.”

Amardeep pouring love towards her mother says that she has been a source of strength in her life. When asked how she convinced her family, Amardeep said that her mother coming from a conservative background always tries to adapt to a new mindset.

My mom has been a pillar of strength. If not for her I think I would not have survived in my career or life. So all the credit goes to my mom for sure. As to where I stand in my life it’s just because of her.”

This pandemic and lockdown situation has been tough for each and every one. Amardeep shared that she also had to face certain ups and downs in her professional and unprofessional life.

Amardeep is highly optimistic and feels that if one thing does not work in our favor, we should not lose hope. Instead, we should be patient and work on ourselves. Something will work in your favor eventually.

“You can not always sit and cry in one corner. Yes, of course, sometimes you can but at the end of the day you need to dust off and just walk on the path that you have chosen.”

The change Amardeep feels can be brought into the industry is that agencies should not always look for something extraordinary rather they should also create a space for freelance models.

The advice she would like to give to all the aspiring models is that if they get an opportunity to work with an agency, then they should definitely go for it.

“The growth as a model will be definitely going to be from an agency than being a freelance model. Because there are instances where a freelance model is getting very little in terms of money than a model working in an agency. When a model is associates with an agency, then they are in safe hands.”

Amardeep is associated with a “Khushiyaan Foundation” which is based in Thane, Mumbai. The foundation organizes beach cleaning drives, feeds poor and needy people. Apart from this, they have an NGO for senior citizens.

Amardeep has some plans and goals for this year and we wish her luck with those plans and hope that she will succeed in the near future.

What you can read next

“I always wanted an identity of my own”, Jitesh Nikam 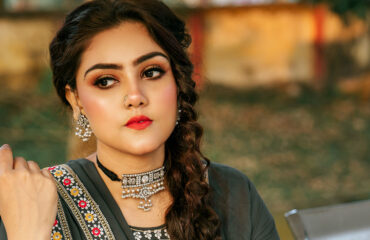 Anupriya Chakraborty, HR by profession but a model by inspiration

2 Comments to “ “By god’s grace I got the opportunity to be a model”, Amardeep Kaur Syan”

What is WMH India?

Get Published with WMH India
View all stories

Looking to get published?